Taco Potato Balls, which are fun spin on the classic flavors of traditional tacos!

My yummy TABASCO Taco Potato Balls are inspired by the most popular croquettes found south of the border where they’re known as Papa Rellena, or Papas Rellenas. In American terms these delicious treats are simply stuffed potato balls.

My particular twist on this recipe is to use taco seasoned ground beef with generous splashes of TABASCO for stuffing stiff but creamy smashed potatoes; the entire recipe is included below. Yes, you can add cheese and diced jalapeños, and maybe some onion and cilantro when preparing the stuffing; let your own taste buds be your guide.

One thing is certain, no matter what you call them, these little balls of joy will make every Taco Tuesday a fiesta to remember. And remember, a few splashes of TABASCO is all you need to flavor your world! 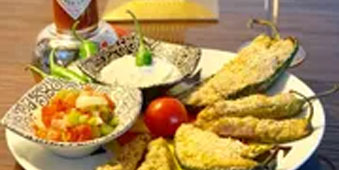 Happy Cinco de Mayo! Planning a Cinco de Mayo party? My yummy Tabasco drizzled Seafood Stuffed Poblano Pepper is a surefire star of your party. With a few splashes of Tabasco your party is sure to be muy caliente!

Here in the holiday obsessed US, where it seems we’re always ready to put life on pause and party, Cinco de Mayo has taken on a life of its own and become another huge national day of celebration. But what are we celebrating? No, it’s not the celebration of Mexican Independence as many people wrongfully believe. Cinco de Mayo is actually the celebration of the Mexican Army’s victory over the French Empire at the Battle of Puebla, on May 5, 1862, under the leadership of General Ignacio Zaragoza.

Let’s be honest, that’s not why we party on the fifth of May. In other words, Cinco de Mayo has become a great PR campaign to sell tequila and Mexican beer! And that’s OK, because any reason is a good reason to enjoy Margaritas and my delicious Tabasco spiced Seafood Stuffed Poblano Peppers. Americans celebrate with Americanized Mexican foods, such as tacos, burritos, chips, salsa, and guacamole. Margaritas, also widely associated with Mexican culture, are often a part of the American Cinco de Mayo festivities and tequila in general tends to play a role. Speaking of Margaritas, in picture is a yummy cranberry orange margy! 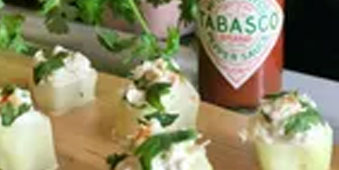 Creamy Cucumber Cups with a Kick

Will sure to impress your game day guests. It pairs crisp vegetable with creamy tasty cheese for the perfect bite. 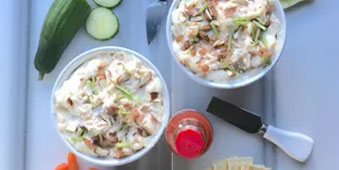 Puttin’ On The Blitz Dip

Not only does the TABASCO Sauce add an extra kick – aka, LOADS of flavor to the dip – but it requires only 5 ingredients.

It is so deliciously addicting and will be a surefire hit at your next game day hosting! 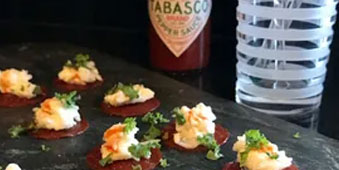 If you’re looking for an easy, quick appetizer for game day…HERE IT IS! Only 4 ingredients needed.

Salami gets baked and turns nice and crisp perfect for soft cream or goat cheese if you prefer. 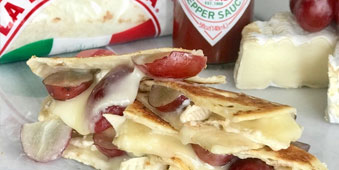 A sophisticated twist on your average quesadilla and most importantly, pure delight on the taste buds!

May I present, Brie cheese and grape Quesadillas for your next game day treats. The @TABASCO-brushed @olemex_labanderita tortillas take this quesadilla to the next level of goodness. Please be warned – you need to make a lot. Your guests will be asking for more, GUARANTEED. 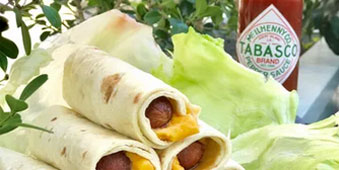 Place hot dogs between two paper towels and microwave on high for 20 seconds.

Lay one slice of American cheese on the center of each tortilla.

Place hot dogs on top of each slice of cheese. Roll up he tortilla, cheese & hot dog.