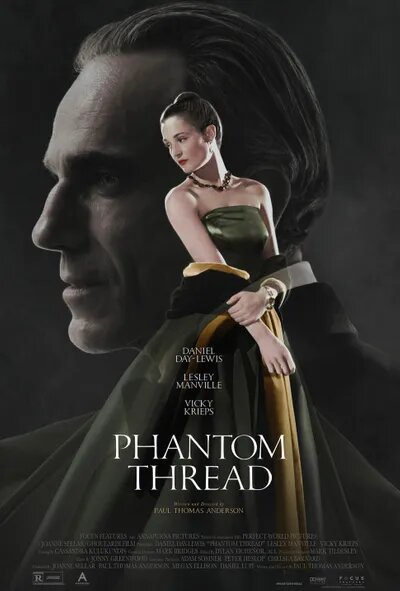 At first glance Phantom Thread seems to have it all, romance, clever wit, drama, and an elegance of style and sophistication seldom seen in 21st Century love stories. Fans of Merchant-Ivory films of the 80s and 90s will find elements of this movie familiar territory. Unfortunately, this finely crafted film featuring stunning cinematography, an Oscar nominated score, and compelling performances with Oscar nods for both best actor and actress, falls a bit short on story. Despite this, the movie has been nominated for a Best picture Oscar.

Daniel Day Lewis alone is worth the price of admission. His screen presence and acting ability powers over the slim story of a love affair between Lewis as a sophisticated eccentric, confirmed bachelor, and clothing designer to the British Royals, and a young, nubile waitress, played by Lesley Manville. The two meet one morning in a roadside café as she serves him breakfast. Men, take notes, this is the proper way to charm women; the scene is unforgettable.

The film takes place in 1950s London and their love affair is interesting enough but prepare yourself for a quiet patience as the characters reveal themselves. Director and screenwriter Paul Thomas Anderson meticulously digs into the depths of these characters. Phantom Thread is more of a story about eccentricity, human frailty, the need for love, and what price one is willing to pay for that which he or she desires. This is not your typical love story but a complex study of how complicated people endure through the joys, disillusionments, heartaches, and tragic entanglements resulting from the cardinal emotions of lust and love.

Phantom Thread takes you on an interesting journey that never quite arrives anywhere. There was an audible sigh by the audience as the credits began to roll, as if to say… Are you kidding? I just invested two hours and ten minutes of myself in this incredible movie, and you leave me here? The audience was visibly disappointed and clearly not satisfied with the ending; there is no proper denouement. Sad, because Phantom Thread is so close to greatness as evidenced by it’s many awards and six Oscar nominations, including best picture, best actor, best actress, best costume design, best musical score, and best director. But despite all of the accolades, it’s difficult to ignore Phantom Thread’s inherent lack of logic.

I recommend seeing Phantom Thread, especially since this may be Daniel Day Lewis’ last film since he recently announced his retirement. But make no mistake; this is not a feel-good love story that will make for a happy Saturday date night. 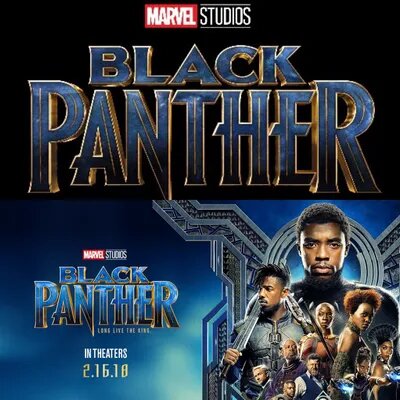 Does it live up to the hype? No. Not even close. This panther’s claws are rather dull.

Black Panther is a movie that relies most heavily on it being a story of African themes, African-American actors, and political correctness. And that should come as no surprise since Stan Lee created the Black Panther character with these same themes in mind fifty years ago. Unfortunately, none of this makes the film a better superhero movie. And isn’t that what matters most.

The story is sliver thin and filled with holes. There are long, somewhat somber, interludes between action scenes. And those action sequences fall far short of the incredible spectacles of great power and impending doom that we have come to expect from Marvel Studios. Black Panther offers nothing new or breathtaking, we’ve seen it all before and delivered much, much bigger and better. There is simply little to find compelling about Black Panther; I was never able to connect with the characters, who with a few exceptions, are regrettably not likable.

I love superhero movies. Thor, Iron Man, Spiderman, Ant Man, and even the Avengers, are fun movies featuring likable characters and vicious villains. Not so here. And Panther is sadly missing a sense of humor; this movie takes itself far too seriously, and especially so when asserting its political agendas.

So the question now is… Can Rotten Tomatoes be bought? Before it’s release the movie was being hyped by the press as being the first movie with a 100% Tomatometer, now three days after the film’s release it’s 97%. This despite only 74% saying they liked it after seeing it and with reviews generally being mixed. Something’s not right.

You might find Black Panther entertaining, but I can’t recommend it. 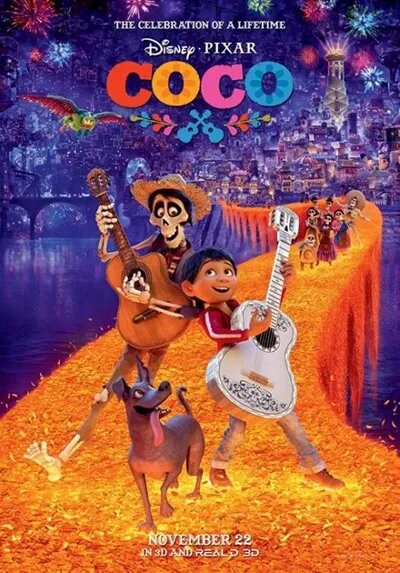 Coco – Five Diamonds – One of Disney/Pixar’s best productions. Coco is an absolute feast for the eyes. Pixar animation techniques continue to evolve and what’s on the screen in this film is a delicious visual extravaganza that takes you places well beyond your imagination. But this is a world where you will feel right at home in that, at its heart, this is a story of the love for family.

Coco is rooted in Mexican culture and the tradition of Dia de Muertos, the day of the dead. A day when families visit the cemetery to feast on the family gravesite while remembering and honoring their lost loved ones. How this unusual family tradition is weaved into such a compelling tale is pure genius; it will surprise you.

Coco has everything, slapstick comedy, action, adventure, and a wonderful soundtrack featuring songs you will be humming as you leave the theater. And, of course, it’s a love story. It all adds up to deliver a wealth of cinema magic and emotions that make this film a must see. My four year old, Isabella, was mesmerized by Coco, and I’m certain that both you and your children will be too. Needless to say, I love this movie!

General Hospital and The Young and the Restless are more believable soaps than this over the top romance fantasy. Fifty Shades Freed had me laughing much more than the screenwriters intended, I’m certain. Silly and ridiculous best describe this romantic farce. Freed exists only as an excuse for Hollywood to provide some light porn to mainstream audiences. This, the third and final installment of the series, notches up the heat with some very graphic sex scenes that are not all that hot in that none of it is believable, titillating, or even entertaining. Save your money and wait to see it on Netflix, Fifty Shades Freed is not worth the price of admission.